Resolved! Counselling for Children could help your child or teenager to overcome their phobia of spiders

Hello there. Thank you for visiting my website. I hope you find the information you’re looking for. If you’re here because your son or daughter has a phobia of spiders then I should imagine that you’ve run out of other options. Logic will have failed to calm their arachnophobic nerves, that’s for sure. You understand why, I’m certain.
Logic will have failed because a phobia is, by its very definition, irrational. A phobia is an irrational fear. Being afraid of sharks is a logical fear, should one come face to face with such creatures. Being afraid of a terrorist screaming “Allahu Akhbar!” on a train is another valid fear. They stand to reason.
However, in this country there is no logical reason to fear spiders. They’re all venomous, certainly, but none of our native spiders can pierce through human skin.
I have helped many people, including teenagers and children, to overcome arachnophobia. If you and your son or daughter live inor around Oxford or Reading then I could help them too!
I also offer counselling and psychotherapy for arachnophobia online, using vsee, whatsapp, zoom. Please get in touch for details.

So why do we develop a fear of spiders?

Spiders haven’t had the easiest time in Western culture. Their use of poison and their use of webs goes against our idea of what a fair fight should be. Such ideas come down the ages from medieval concepts of chivalry, where men faced their opponents face to face, fair and square. They have also been seen as creatures of the night, allies to witches, to devils, to evil itself. Think of a hallowe’en celebration without the presence of spiders.

They’re also creatures which lurk in dark corners, darting out from beneath the sofa and startling us. From that perspective they don’t really help themselves.

Arachnophobia is also one of those things which can be handed down from generation to generation, from friend to friend.

My mother once screamed in her bedroom. I was six at the time and peered nervously around the doorway. I saw her staring, terrified, at a house spider which sat upon the wall. From that moment, until my discovery of hypnotherapy, I remained terrified of those creatures. My sister, by the way, inherited mother’s fear of wasps. Children look to parents for signals as to what is safe and what is not. A parent with arachnophobia is a very effective medium through which a child can acquire that same fear.

Friends at school can also pass on their fear. Girls, in particular, are both consciously and unconsciously keen to fit in and sense the strong emotions exhibited by their peers.  I can remember, as a teacher, seeing the fear spread from girl to girl (I worked in a girls’ school) as they queued up for their vaccinations in year 8.

How do I work with arachnophobia? 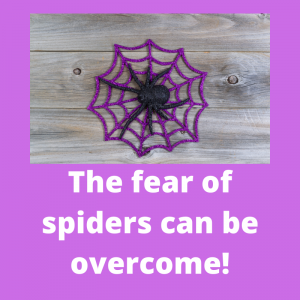 Well, for simple phobias which have arisen because of the circumstances described above the treatment is simple. Imagination has created the fear and so imagination can resolve that same fear. I would help your child to harness their imagination for good instead of for ‘evil’. Hypnosis, mindfulness, education and a graduated program of exposure will help them to overcome the phobia in a very small number of sessions.

Sometimes, however, the fear of spiders becomes enmeshed within a greater web of anxieties and fear. In cases such as these a permanent solution would require deeper work on the underlying anxieties. This would take longer. Furthermore, the younger the client the less hypnotherapy and related therapies will be applicable in their fullest sense. It is there that more traditional forms of child and adolescent psychotherapy would be employed.

I am a fully trained adult psychotherapist, hypnotherapist and am also a child and adolescent counsellor. I will learn to select the very blend of psychotherapeutic approaches which will work best for your child or teenager.