Nail biting? Let’s put a stop to it!

Resolved! Counselling for Children could help your child to end the habit of biting their nails. It’s time to bin it!

Nail biting is one of a group of conditions called OCRDs (obsessive-compulsive and related disorders). It can often be trivialised, it causes little actual harm, after all, but it can be a dreadfully difficult habit to stop. It’s a difficult one to stop because it can become a largely unconscious habit, so that the nail-biter can be unaware they’re even indulging in the habit.

It’s also difficult to stop because it frequently forms a coping mechanism, being a soothing behaviour which assists with deeper anxieties, fears and other repressed emotions. This is why it’s essential  to deal with those emotions at the same time as the habit of nail-biting is addressed directly.

It’s not just a matter of the occasional nibble or the trimming of nails which have broken or become ragged. I’ve used counselling and hypnotherapy in Reading, Oxford as well as online to help clients who bite their nails so far down that they become bloody, painful and even, at times, infected.

I also offer counselling and psychotherapy for nail-biting online, using vsee, whatsapp, zoom. Please get in touch for details.

What’s the purpose of biting your nails? 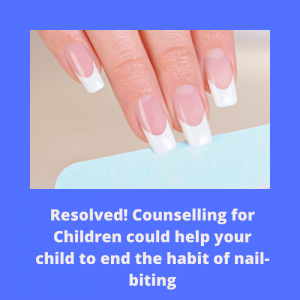 Something like 50% of children bite their nails. Half of these people will have stopped the habit by the time they reach their 30s. Those will be the people who have matured and learned, in the process, to process their emotions in more constructive ways.

Research by Williams, Rose and Chisholm (2007) discovered that young adults bite their nails more often and more severely when they’re bored or stressed.

It really isn’t just a bad habit, it serves a psychological purpose of relieving and alleviating stress.

The habit of biting your nails is distracting, it’s an activity which takes the mind away from worry and rumination.

It also involves an oral element, which is psychologically comforting and is also, perhaps, soothing in that it involves our touching our own faces as we indulge in a little nibble.

Resolved! Counselling for Children has helped a good many people, of all ages, to stop biting their nails. Counselling, hypnotherapy and other approaches has seen many a nail saved from the indignity of dental mutilation. Perhaps your son or daughter could learn to have  – and keep – attractive and healthy nails too.

Nail-biters often adopt other unhelpful habits too. Which ones do you have? 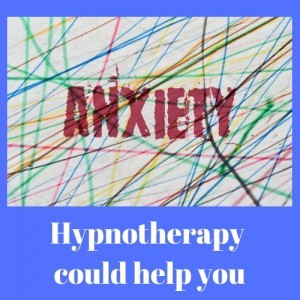 This would certainly explain why people who bite their nails are also more prone to similar stress-related behaviours such as trichotillomania and skin-picking (Journal of the American Academy of Dermatology, January 2016 p51-53).

If you get your child some help, from a skilled and experienced therapist, then they will be able to end the habit of biting their nails before they migrate to other coping mechanisms later on in life.

It’s here that I need to sound a note of caution. I am a UKCP trained psychotherapist, trained for four years in the use of hypnotherapy and psychotherapy. I am also aware that habits such as nail biting have a deeper hinterland.

More poorly trained hypnotherapists will deal only with the symptom presented to them. If the underlying emotional root of the problem isn’t addressed, if healthier ways of processing feelings aren’t developed then the problem either returns or changes into another coping strategy.

Nail biters, where these new ways of being aren’t instilled, will frequently move onto other habits such as trichotillomania or dematillomania.

How can hypnotherapy and other approaches help reduce and kill this habit?

I’m also trained in delivering and teaching practical tools which are designed to help people manage their stress and anxiety levels in more constructive ways. These approaches are designed to become habits which leave the client permanently able to manage feelings which were once suppressed and which then came out through maladaptive habits such as nail-biting.

As a child and adolescent counsellor I’m also able to use other approaches more suited to the younger age brackets. Play, sand, art, drama and other approaches will render the unconscious habit a conscious decision, process feelings more effectively and create a true motivation to make and consolidate change.

Your son or daughter – should they wish to do so – can learn to break this habit and I have a wide array of tools and approaches designed to help them do just that.

If  you’d like your son or daughter to have some therapy in Reading, Oxford, or online, in order to help them stop biting their nails then perhaps you could get in touch with me. I’ll be glad to explain how Resolved! Counselling for Children could help them.

You could email me at paul@resolvedcounsellingforchildren.com

Alternatively, simply use the contact form below, in the footer of this page.

However you choose to get in touch, why continue to allow your child to put up with painful nails? It’s not as if biting your nails deals with the problems? Wouldn’t they like to be happier, calmer and more confident too? Resolved! Counselling for Children could help them to do just that.

I hope to hear from you soon, Best wishes in the meantime.