Your son or daughter doesn’t have to allow life to shrink into home schooling and social isolation. School refusal could become a pleasure in being there

Is your child refusing to go to school or failing to last a day without ducking out of a couple of lessons? Are they begging you to let them stay home, showing anxiety at the thought of going in? Does it feel as if they may actually have a phobia of school? Are they constantly calling you and asking you to pick them up earlier than the end of the school day? If school renders your son or daughter tearful, depressed, anxious or angry then perhaps it’s a case of school refusal, school phobia or school anxiety settling in.

I have worked with boys and girls from the age of six to seventeen. If you live in or around Oxford or Reading and have a child who is exhibiting the signs of school, refusal or school anxiety, Resolved! Counselling for Children is here to help. I’ve worked with children and young people, as young as nine and as old as seventeen, with this problem before.

I also offer counselling and psychotherapy for school refusal online, using vsee, whatsapp, zoom. Please get in touch for details.

What exactly is school refusal or school anxiety

Well, it pretty much does what it says on the tin. It’s a persistent anxiety regarding attending school which can lead to a point blank refusal to do so. It’s not laziness or a genuine lack of interest in education. It’s not a child occasionally exhibiting an unwillingness to go to school. It’s a persistent behaviour based on a genuine fear.

It can be a fear based on events within school. Perhaps some bullying has taken place and your child is afraid of going back into school and to be exposed to more of the same. Sometimes there are other social problems which leave the young person too upset to attend, too fearful of the consequences, the isolation, the mockery.

Perhaps a teacher (or teachers in general) are experienced as being unjust or unkind. I was a teacher once and know full-well that some teachers can be. Unfortunately, however, schools aren’t often easy to approach when the behaviour of teachers in in question. Anxiety builds over time and can end in a point-blank refusal to attend. It’s a phobia of school, a real terror.

It may be emetophobia and / or health anxiety. School are hotbeds for illnesses and some children can become so fearful of germs and being sick that they learn to avoid places where contagion is more likely. School is just one such place, though there is bound to be others.

The pressure of testing, conditions such as dyslexia leading to a fear of the work leaving them feeling ‘stupid’. Parental divorce, a sudden and severe illness in the child his or herself, all of these and more are potential causes of school refusal or school phobia. Perhaps there’s a developmental difference such as high functioning autism or ADHD coming into play. I have worked with them all and know that school anxiety can be overcome. 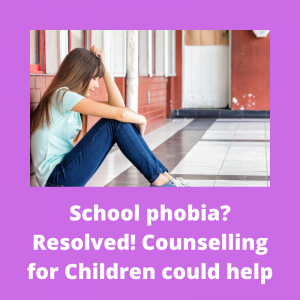 Obviously, children who do not attend school have generally worse educational outcomes than those who attend on a regular basis. The statistical evidence for this is clear and unambiguous.

However, the psychological impact of school phobia is less clearly measurable. When school refusal takes hold anxiety has won and anxiety is not a good winner. It doesn’t accept what it is given but merely demands more. Social anxiety outside of school commonly increases and along with it come anxiety disorders such as OCD, trichotillomania, tics and suchlike) and other consequences such as depression.

The family is affected too. Other siblings may well exhibit envy that their brother or sister is ‘getting away with not going to school and may also begin to flirt with non attendance.

Employment and financial security suffers as parents have to shift their working patterns in order to cope. Disputes between parents can escalate and all this, together with a sense of worry and failure, can have a deleterious impact upon maternal mental health too. It can feel as if she is up against an unbending and unsympathetic system which merely demands school attendance and which does little to offer positive support.

The longer it lasts the harder it is

Staying at home becomes the norm. Eventually systems respond and work comes home. Perhaps external tutors are arranged and come to visit the child in their own home. The system eventually adapts. Alternatively, depending on the local authority and the level of insistence of parents, the child simply falls through the cracks and becomes forgotten.

Either way, not attending school becomes the new normal and it becomes harder and harder to bring the child to a place from where they see the desirability of going back in. ‘What will friends say? What will teachers say? I’ve been off for three months now and will never catch up with the work anyway? What’s the point?’ Besides, life outside of school can become too comfortable and easy, too quickly.

Does your son or daughter want to change?

If your son or daughter wants to change, if they want to lose their anxiety, if they miss their friends then perhaps there is a way back. If they’re willing to work with somebody like me then perhaps Resolved! Counselling for Children could help.

I could begin to work on helping them to overcome whatever lies behind their school refusal / school anxiety and so remove the need for the fear. I could begin to support them in a carefully managed return to school. It has to be gradual, it has to be one little step at a time. In co-operation with teachers and other authorities your child could begin to conquer their fear – should they truly wish to do so.

If you live in or around Oxford or Reading or if you have a child who is willing to undergo counselling for school refusal online, please do consider getting in touch with me.