Counselling and psychotherapy for trichotillomania

Trichotillomania can be beaten. Resolved! Counselling for Children could help!

Trichotillomania doesn’t have to be accepted. Your son or daughter could learn to beat it into submission

If your child is beginning to give up hope of ever being able to stop pulling out their own hair then please don’t despair. I have worked with compulsive hair pulling a great many times and in children as young as eight years old. If your child or teenager is prepared to engage with me then we’ll find a way out of the habit together.

Already there are young people in Reading, Oxford and surrounding towns and villages who have freed themselves, with my help, from the habit of pulling out their own hair, eyelashes and eyebrows. Perhaps your son or daughter could be next! I also offer counselling and psychotherapy for trichotillomania online, using vsee, whatsapp, zoom. Please get in touch for details.

What is it anyway? 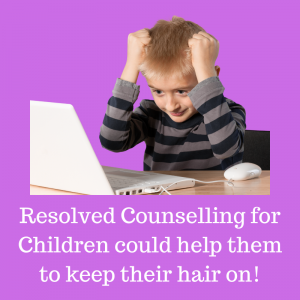 Labels are just that: labels. Still, you did ask and so here goes… Trichotillomania is a cousin of dermatillomania (referred to in the video as ‘excoriation’) and nail-biting.

Together they’re commonly termed as being bodily-focused repetetive behaviours / disorders. Once upon a time trichotillomania was classed as an ‘impulse control disorder’. Today is is clumped with its cousins, according to the DSM V, under the umbrella title of ‘obsessive-compulsive’ disorder.

Perhaps the technical terminology doesn’t matter very much. It all adds up to say that trichotillomania is a compulsion, it is an unconscious habit which often happens without the sufferer being aware of what they’re doing and significant psychological discomfort can arise if an attempt is made to end the habit without adequate support.

This is where I come in, to ensure that your son of daughter learns to tackle the habit with every form of support he or she requires. If they are determined to stop then they can and they will. I will be delighted to help them. Get in touch and we’ll discuss how I could be of help to them.

It’s a more common problem than many people think 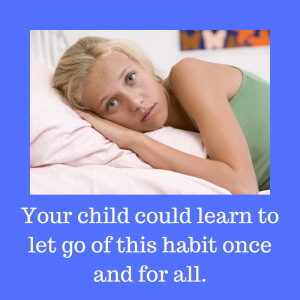 Trichotillomania affects up to one in thirty people at some point in their life. Girls seem more prone to developing the problem than boys and yet I’ve worked with several men who have come to exhibit such behaviours.

It most commonly begins during teenage years but can develop at any time. My youngest client, to date, was eight and the eldest was in their seventies.

The causes of trichotillomania, as with any of its cousins, remains unclear. Heredity and genetics are suspected to play a part but quite how far these can be held responsible is unknown. After all, it could also be a learned behaviour, handed down through the generations.

One thing does, however, seem clear. I have never worked with a person suffering trichotillomania who didn’t also suffer from anxiety and / or depression.

Trichotillomania, much like many other problems which arrive at my door, is a symptom of something deeper. It is a coping strategy and until another means of dealing with anxiety is internalised it is difficult to be free of the habit.

This is why the old-fashioned ways of dealing with the habit so often fall short. They fail to take account of the underlying anxieties which gave rise to the habit to begin with.

Nobody really knows what causes ‘trich’ but it does seem to be partly hereditary. Whether this is due to genetic influences or learned behaviour is anybody’s guess for now.

Once I’ve helped your son or daughter to resolve the anxiety or unhappiness which lies beneath the habit they will be able to hope to be free of hair-pulling, for good.

Wouldn’t that be great!?

It’s a rather cruel habit. It begins because of an anxiety and then leaves the anxious young person with bald patches in their hair or eyebrows or eyes completely devoid of lashes. It’s perfectly designed to create a social anxiety which only feeds the habit further. What a nasty little vicious circle it it!

If you’re reading this then perhaps it’s time to put a stop to this vicious circle, once and for all. Get in touch and we’ll discuss what I could do to help.

I help my clients to work towards two goals, usually tackling them both at the same time.

The first is to begin to take back control of the habit itself. This is a simple approach in theory but can be difficult to put into practice if the second track isn’t being worked upon too.

The second track is to teach them how to manage their emotions more effectively, to deal with anxiety without the need for pulling hair and to build confidence and self-acceptance in order to leave no need for anxiety in the first place.

Everybody is different. Everybody will need a different form of therapy and I have been trained to use a great variety of approaches, in an integrative fashion, to help your child to achieve their goals.  Mindfulness, hypnotherapy and other forms of child and adolescent psychotherapy have proven an effective blend in the past. Together we’ll find just the right combination of therapies for your child. We’ll work as a team in order to help your son or daughter to be free of this habit once and for all.

Get in touch and we’ll discuss things in greater detail

Your child or teenager can beat trichotillomania and if they’re willing to get to work then I’ll be glad to help. If you live in or around Reading or Oxford then give me a call on 07786 123736 / 01865 600970 / 01183 280284 or email me on paul@resolvedcounsellingforchildren.com. Alternatively you could use the contact form at the footer of this page. However you contact me, I look forward to hearing from you.